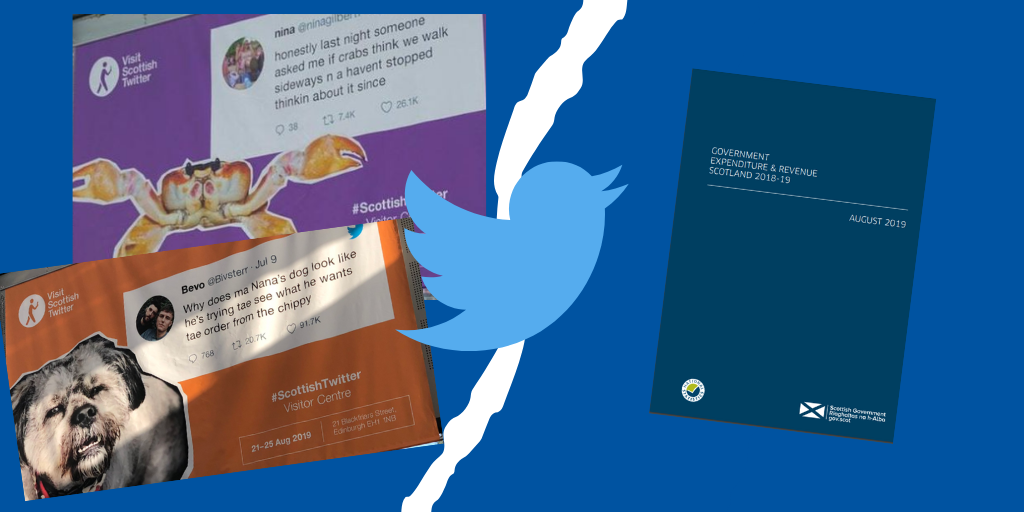 Today marks a big day for #ScottishTwitter, with the opening of the first ever Scottish Twitter Visitor Centre. At the same time, our top trending hashtags include #GERS and #GERSmas as the Scottish Government publishes its figures detailing the nation’s tax and spend – sparking the fierce annual to and fro debate on the national finances.

The visitor centre, featuring tweets as classic as “Canny believe how expensive being alive is” and “a twirls just a flake wae a jacket oan” bring together the best of ‘Scottish twitter’ as chosen by a panel of comedians.

A source of national entertainment and international bewilderment, the Scottish twitter microcosm has become a bit of a cultural phenomenon. For the uninitiated, you can get up to speed by reading this Buzzfeed blog, 35 Reasons Scottish Twitter is the Wildest Place on the Internet. Don’t worry, for those feeling a bit ‘outwith’, you can make use of the tweet translator in the centre.

But hop onto the social network today and you will see another side of our national online persona. The annual publication of @ScotGov’s Government Expenditure and Revenue Scotland (GERS) figures provide an estimate on our national deficit and an opportunity for those on both sides of the independence debate to defend their corner.

The figures, first published in 1992, have proven to be increasingly controversial as devolution has grown and the economic case for an independent Scotland has been put forward. During the 2014 independence referendum, the Scottish Government’s white paper stated “GERS is the authoritative publication on Scotland’s public finances”.

Some of the debate stems from the perceived reliability of the data. A recent blog by the Fraser of Allander Institute explains that while the spending figures can be sourced from actual data, counting some of the revenues requires estimation – particularly those collected by HMRC.

For example, duty collected from our key sectors and exports can be hard to pin down. The report cannot identify how much duty is paid by consumers in Scotland or how much is paid by those elsewhere in the UK. However, the Institute has said other figures such as Scottish GDP, unemployment, productivity and trade are also based entirely on estimation – but those figures tend to attract less debate than GERS.

This year’s GERS figures also show that Scotland spent £12.6bn more than it raised over the past year, the equivalent to 7% of the country’s GDP. In comparison, the UK as a whole has a deficit of £23.5bn (1.1% of GDP) and the EU has set a target of 3% of GDP for its members.

And so begins the bun fight! Much of the debate often focuses on these ‘missing billions’ – highlighting the austerity that may be needed in an independent Scotland to close the gap. The counter argument, which you can read in much more colourful language over on Scottish Twitter, is that the data paints a picture of the current financial and political arrangements of Scotland within the UK – including national UK spending on things like HS2 and Trident.

So if you find yourself scrolling down your timeline today lost in the back and forth, perhaps you could take a break from the digital world and take a wander into Edinburgh to visit a room of printed out tweets instead.

The visitor centre is open 10am-8pm on 21-25 August at 21 Blackfriars Street, Edinburgh. The Scottish Government’s GERS figures are available on the website. Debate, from both sides of the coin, can be found on #ScottishTwitter.