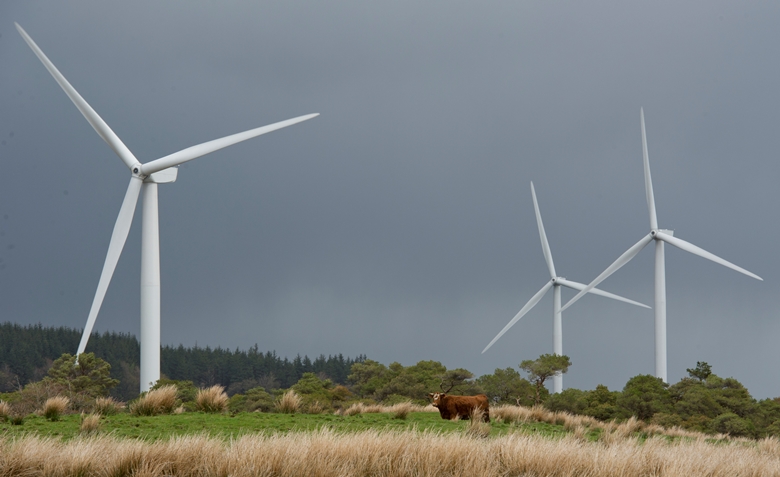 Neilston Community Windfarm, in East Renfrewshire, has been acquired by The Renewables Infrastructure Group (TRIG) as part of an agreement that will see the creation of a new fund to invest in the long term development of the local area. The four turbine 10 megawatt development, opened by the Nicola Sturgeon as Deputy First Minister in 2013, was 28% owned by Neilston Development Trust (NDT) and 72% owned by developers Carbon Free.

After repaying the loans taken out to fund NDT’s share of the windfarm and deducting legal costs, there will be a surplus of approximately £2 million. This will be used to start a charitable fund to support local facilities, services, jobs and community life in the Neilston area.

This sum is in addition to £400,000 already received by NDT over the last 4 years, which has contributed to the employment of staff and the provision of key services from the NDT’s ‘Bank’ community facility. The scale of the return reflects the strength of the investment model used by the Trust with substantially higher payments earmarked for the local community than would have been the case with traditional community benefit models.

“This agreement gives us guaranteed funding to invest in the future development of our community”, commented NDT Chair Pauline Gallacher. “The windfarm was not a risk free investment but the high level of return over a short period is a tribute to those who supported the principle of a joint venture.  We hope that this agreement will result in wider support for more community led investments in Neilston and elsewhere.”

NDT has highlighted a number of reasons why the offer from TRIG was particularly attractive at the present time.

Gordon Keenan, Chief Officer explained: “Although the wind farm’s prospects are good, NDT found it difficult to manage the variations in income in light of the fixed interest loans we took out. This was caused by changes in oil and gas prices and the loss of certain subsidies. This extended the period before funds could be made available for community projects and grants. By selling our share of the project to a well-regarded and experienced investor, the funds are guaranteed and available, when needed, to support the sustainable development of the community.”

Joanne Karatzidis, Investment Manager at Social Investment Scotland, which supported NDT’s initial investment in the wind farm said: “We are delighted that the NDT Board has found a way to secure a long-term legacy for the community and look forward to continuing a positive and productive relationship with NDT.”

Daniel Wilson-Dodd, Head of Lending at Big Issue Invest, added: “We have been impressed by the management, foresight and professionalism of the NDT board.  The sale of NDT’s interest in the wind farm is a positive outcome for the people of the area and we are delighted to provide an initial donation to the proposed legacy fund which is being established with the sale proceeds.”

The windfarm will continue to contribute to Scotland’s green energy supply, generating 2.5 times the annual electricity requirement for Neilston.

Neilston Development Trust is to hold a community meeting to outline the plans for the new fund, which will be constituted as a Scottish Charitable Incorporated Organisation (SCIO), at St Thomas Church Hall, Neilston, on Tuesday 30 May from 6:30pm to 8:00pm.

The Renewables Infrastructure Group is an investment company focused primarily on wind and solar energy infrastructure in the UK and Northern Europe. TRIG’s portfolio consists of 53 renewable energy generation projects (25 onshore wind, 28 solar PV) with 710 MW of net electricity generating capacity. TRIG is the largest renewable infrastructure fund listed on the London Stock Exchange with a market capitalisation of £1.0 billion. More about TRIG can be found at: www.trig-ltd.com.

Photographs of the windfarm are available on request