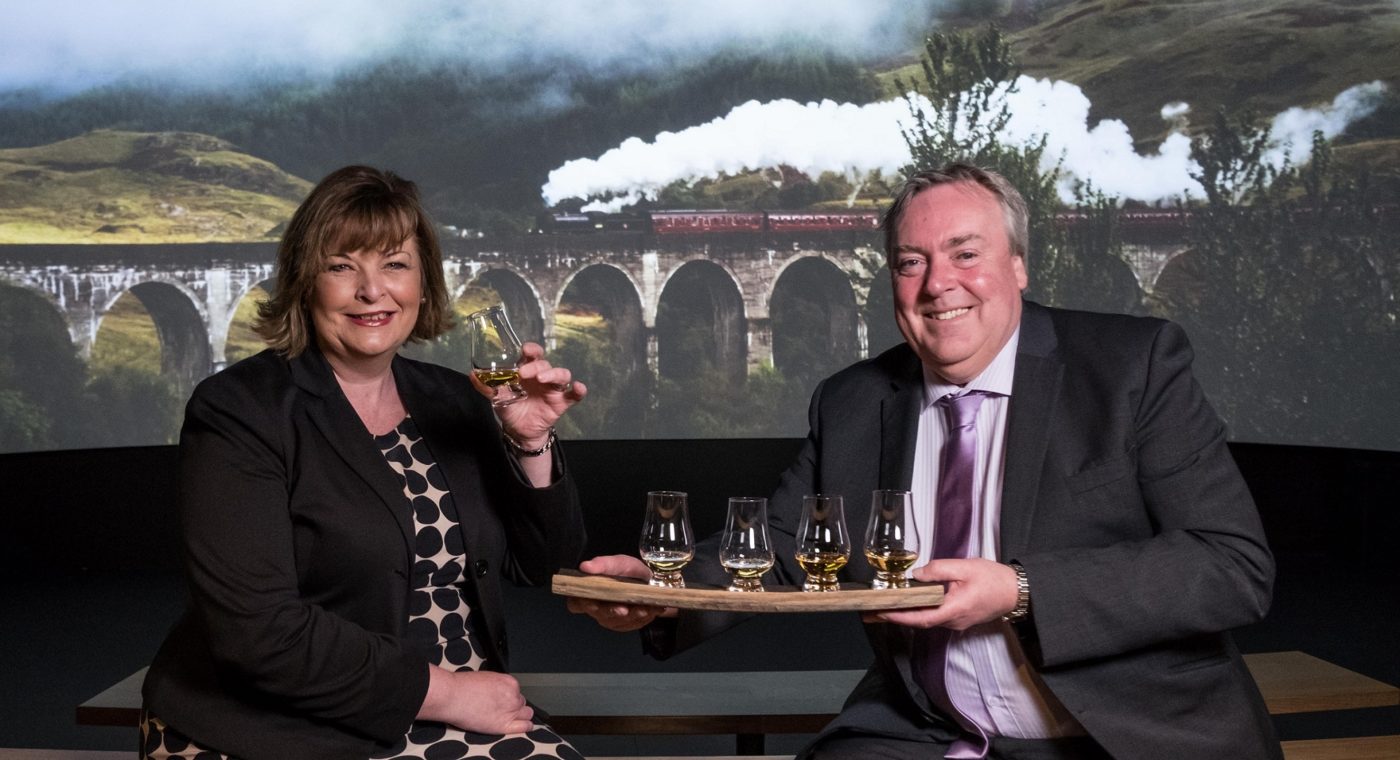 On Wednesday 3 May the Cabinet Secretary for Culture, Tourism and External Affairs, Fiona Hyslop, launched the new Sense of Scotland tour at Edinburgh’s Scotch Whisky Experience.

The revamped tour takes visitors on a stunning 180° panorama bird’s eye tour of Scotland’s five whisky-making regions. The specially commissioned film sees Scotland’s landscape come to life as it is delivered to the heart of the capital as part of the new tourism offering.

The footage, which was captured throughout 2016, also demonstrates how the landscape and geography of the country contributes towards the final flavour of different Scotch whiskies.

Visitors are then introduced to the art of blending in a recreated 19th century Blender’s Sample Room. In the beautifully styled surroundings, guests are taken back to 1870 and the birth of blending in Edinburgh, delving into both the history and alchemy of Scotland’s most famous export.

The new tour uses the latest in audio and visual technology, including unique “holo-drams” that bring the art of blending to life.

Tourism Secretary Fiona Hyslop said: “Food and drink remains a key component of the visitor experience and culinary tourism is increasingly being sought out by global travellers.

“We know visitors want to try authentic, local flavours and specialties and that is why attractions like The Scotch Whisky Experience are a huge draw for tourists and local people.”

The popular elements of the tour remain, including the fascinating barrel ride through the whisky distilling process, and the jewel in the attraction’s crown – the World’s Largest Collection of Scotch Whisky.

Susan Morrison, director and general manager at The Scotch Whisky Experience, said: “Our rolling programme of development has seen us invest more than £8m in upgrading the visitor experience in recent years.

“Our latest changes to the tour use different sights and sounds to bring Scotch whisky to life, whilst also giving our visitors a sense of Scotland, the stunning locations in which different whiskies are made, and how this helps to make the drink so special.”

Malcolm Roughead, Chief Executive of VisitScotland, said: “Whisky is one of Scotland’s most valuable assets with one in five visitors making a trip to a distillery during their stay and even more visiting a bar, pub or restaurant to sample an authentic dram.

“Already a five star attraction, this new tour at Edinburgh’s Scotch Whisky Experience will offer visitors a totally unique insight into the blending process of our national drink.

“With the latest in audio and visual technology showcasing the stunning scenery of the five whisky-making regions, the Sense of Scotland tour is also a fantastic way to celebrate the land that inspires the world famous tipple.”

The attraction has increased the number of languages available to 18, with the additional of Brazilian Portuguese, Cantonese and Korean. From summer 2017, the tour will also be delivered in British Sign Language and American Sign Language through screens on the attraction’s new multi-functional audio guides.

The Scotch Whisky Experience reported its busiest ever year last year, with a 9% increase in visitors to 326,000 and the number of people taking the tour rising 12% to 176,000.