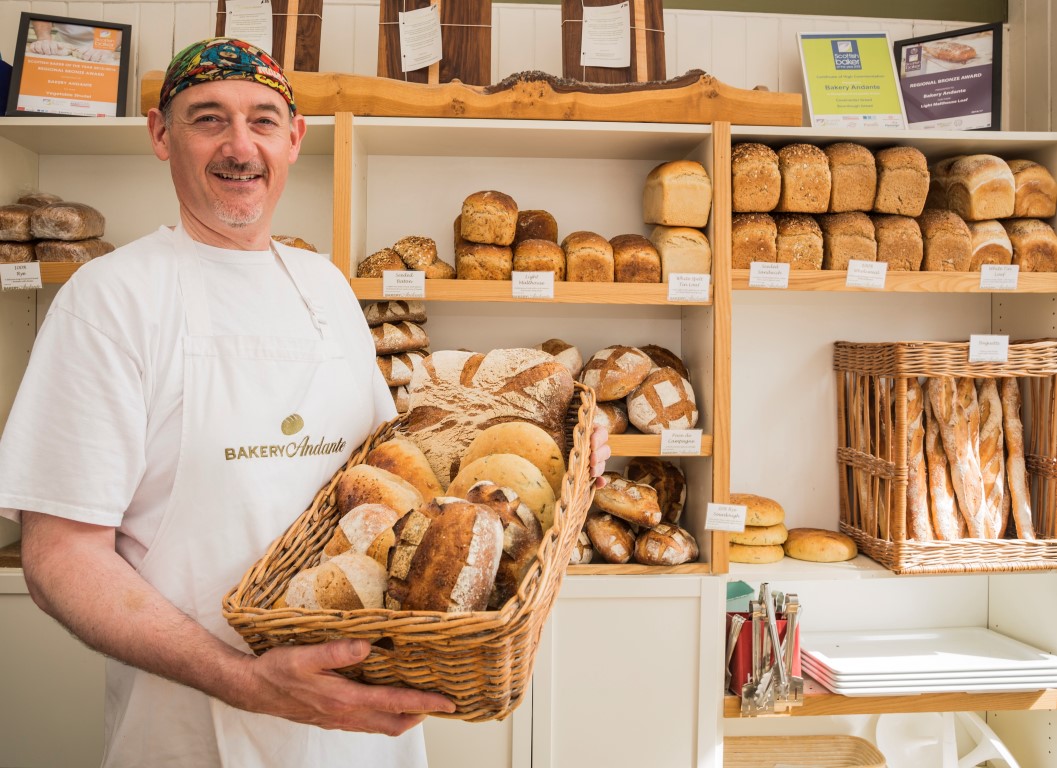 Following its success in Edinburgh, the award-winning Bakery Andante has secured a deal to supply artisan bread to a further four branches of Waitrose in Scotland.

Stocked in the two Edinburgh branches of Waitrose since 2015, a selection of Jon Wood’s handmade sourdoughs and New York deli-style bread will now also be on sale at the Byres Road, Milngavie, Stirling and Newton Mearns stores from mid-April.

Bakery Andante first opened in Morningside in 2010 and has gone from strength to strength, recently expanding with the opening of new premises in Leith. All of the freshly baked breads are made from scratch, using locally sourced ingredients where possible – with no improvers, additives or food colouring.

The bakery lives up to its name – ‘andante’ is a musical expression meaning ‘at a slower tempo’ – and that is exactly how the bread is made, using the Slow Food method. The sourdoughs take 24 hours to produce, allowing time to create the depth of flavours.

Owner of Bakery Andante, Jon Wood comments: “Initially we weren’t interested in supplying supermarkets. However, when we got the call from Waitrose we decided it was definitely worth a try, as it suits our brand perfectly – and they liked our home-made, high quality artisan product.

“Supplying the two stores in Edinburgh has been extremely successful, and we’re pleased that, with our new facility in Leith, we’re finally able to supply more of the branches. We’ve hired some extra staff and have taken on some fantastic apprentices, so it’s an exciting time for us at Andante.”

Jon started baking when his children were born, as he wanted to make good, sustaining food for them. Before he knew it, he was getting up at 2am to bake for school fetes, and had developed a passion for making bread. After being made redundant in 2010, he was able to follow his dream and open the bakery he’d been talking about for years.

Tracey Marshall, buyer for local & regional at Waitrose adds: “Demand for artisan bread is growing, with sales enjoying a 267% increase year on year. With the quality and taste of Jon’s bread it’s easy to understand why. You can tell time has gone into it, the flavours are exceptional. It has been incredibly popular with our Edinburgh shoppers and we have no doubt it will be successful elsewhere too.”

Andante white sourdough, Andante 30% Rye sourdough and Andante New York deli style will be available at the Byres Road, Milngavie, Stirling and Newton Mearns stores, with an additional seasonal line which will change every two months. Jon will be hosting tastings in-store for the first few weeks. If the bread proves popular, it is hoped that an additional two lines will be added, to bring all six stores in line with the offering available in the Edinburgh branches.

Waitrose continues to seek out new producers and suppliers across Scotland, with more than 400 Scottish lines now available.