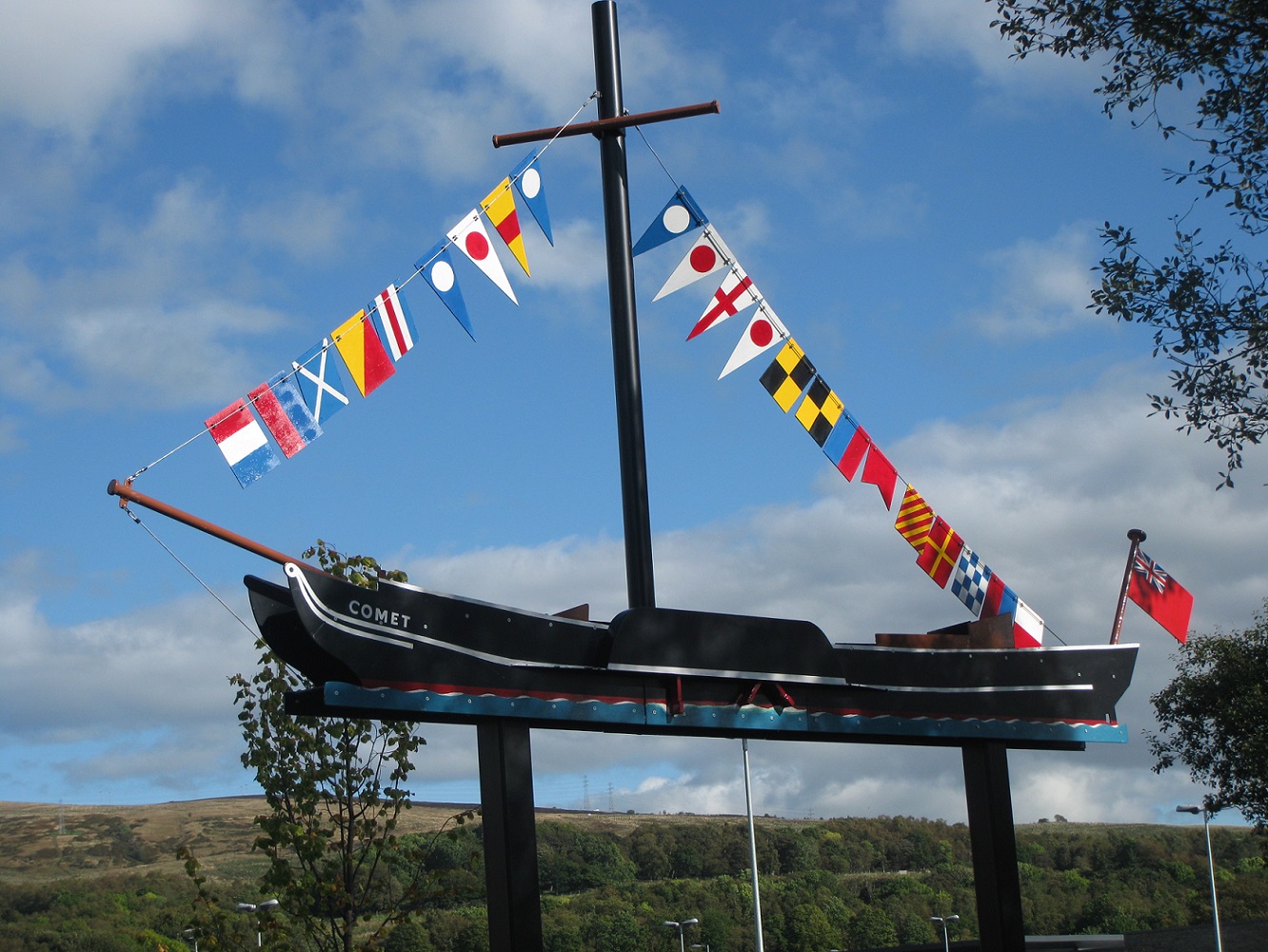 A scale silhouette of the first commercial steamship in Europe will be officially handed over to Waitrose this week, having been gifted to the supermarket by Helensburgh Heritage Trust who raised the money for it.

The original steamship – the Comet – which was only three times larger than the sculpture now on display near the filling station at Waitrose on Cardross Road, was commissioned by Helensburgh’ s first Provost, Henry Bell in 1812.

Today, Billy Petrie, a Helensburgh resident and former Provost of Argyll & Bute Council, officially handed over the sculpture to Waitrose.

The sculpture celebrates the contribution made by steamship pioneer, Henry Bell, to the town. Through the Comet, Henry Bell put Helensburgh on the map as a tourist destination.

The original Comet was built at John Wood’s shipyard in Port Glasgow. The Comet was 42ft long (13 m) and was introduced as a way of bringing guests from Glasgow and Greenock in comfort to the Baths Inn, an inn owned by Henry Bell and his wife (now part of the Queen’s Court flats at 114 East Clyde Street).

The Comet proved a great success and consequently Henry Bell had it lengthened by another 32ft (10m) on Helensburgh beach in 1819. Bell then placed his ship on a service through the Crinan Canal to Fort William calling at some of the islands on the way; it was the first steamship to provide a service on these waters.

In 1820 en route back to Glasgow from Oban, the Comet met its end; coming into the Dorus Mor tide race in Argyll the boat’s engine was not strong enough to cope with the wind and the tide and it washed ashore on Craignish Point where it split in two, before sinking, fortunately with no loss of life. The engines were rescued and are now in the Science Museum in London.

Speaking about the replica of the Comet, Stewart Noble, former Chairman of Helensburgh Heritage Trust, said how proud he was to finally see the sculpture unveiled. He said, “Henry Bell was one of the great pioneers in British economic history and so deserves to be commemorated. Not only was he a pioneer in tourism, but more importantly it can be argued that the pre-eminence of shipbuilding on the River Clyde a hundred years later can also largely be attributed to him. Unfortunately, he is not as widely remembered now as he should be, and so this sculpture should help to remedy that. I am therefore grateful to Waitrose for agreeing to have it on their land.”

Speaking on behalf of Waitrose, Max Byrne, deputy manager at Waitrose Helensburgh said, “As far as I know, we’re the first – and only – Waitrose branch in the UK to have a sculpture on our doorstep and we’re very honoured to be presented with it by the Trust.”

A group of companies and individuals produced the Comet sculpture. Steelwork was by Fleet Engineering Department, at Babcock Marine and Technology; painting by Highland Colour Coaters; design by Ian Plenderleath; structural engineering by David Nicoll; painting of flags by Neil Macleod and rigging by Richard Schooling – all generously gave their services free of charge. Financial assistance came from Argyll and Bute Council, the Heritage Lottery Fund, Waitrose and Barr Construction.